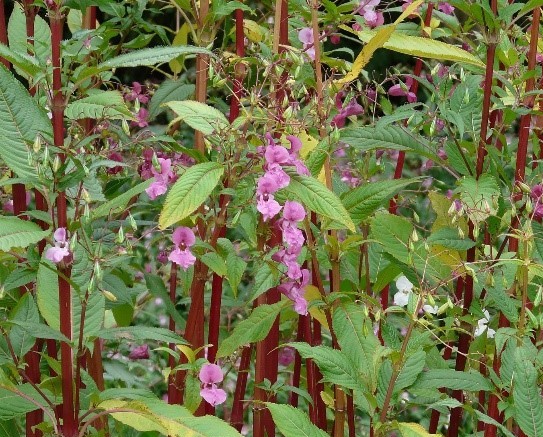 Call for volunteers to help tackle one of Britain’s most invasive species: The Wensum balsam project

Invasive Species Week begins on the 16th of May, and Norfolk Rivers Trust (NRT) and the Norfolk Non-Native Species Initiative (NNNSI) are calling for volunteers to support their efforts in removing Himalayan balsam, an invasive non-native plant, from the River Wensum.

The Wensum balsam project – funded by Anglian Water and supported by the Environment Agency – runs until 2025 and aims to reduce, and where possible, eliminate Himalayan balsam from the Wensum catchment.

Himalayan balsam is a highly invasive plant that mainly grows along riverbanks and in damp woodland. Balsam poses a significant threat to the environment as it outcompetes native plants for light, nutrients, pollinators and space, undermining native biodiversity. It also dies back over winter, leaving riverbanks bare and vulnerable to erosion.

Rob Dryden, a biodiversity specialist for the Environment Agency, said: “We fully support the initiative to control Himalayan Balsam in the Wensum Catchment. Collaborative work by volunteers, landowners, local authorities and conservation organisations should make a real impact in controlling this invasive plant and help protect the ecology of the internationally important River Wensum.”

Chris Gerrard, Catchment and Biodiversity Manager at Anglian Water, said: “This is a great chance to make a real improvement to our local environment, and a chance to spend time by a beautiful part of the Wensum as it flows through Norfolk. Balsam grows rapidly along rivers, crowding out native plants and making river banks vulnerable to erosion, so it is vitally important that we clear this invasive species from the waterways.

“We have recently launched our Get River Positive Campaign which shows our commitment to the environment in our region, and as part of this we are investing millions in the region working with local river and environmental groups to enhance our rivers and create new habitats so wildlife can thrive.”

The project is taking a comprehensive, river catchment-based approach, with initial efforts focused on the Wensum’s headwaters and tributaries. This ensures that removal efforts are not thwarted by seeds washing downstream, obviating inadvertent recolonisation.

Surveys were conducted throughout 2021 to identify areas of balsam infestation, and those located in the upper catchment will be prioritised for removal of the invasive plant during this year’s balsam season.

How can the public help?

The project team are recruiting volunteers to join their balsam task force who carry out the following duties to tackle Himalayan balsam by:

Liam Smith, Nature Recovery Officer at NNNSI, said: “We would love new volunteers to join our team. Pulling out Himalayan balsam is really easy to do as it is tall and shallow-rooted, it’s also an effective method of control as long as this is done before the plant goes to seed! No experience is necessary, and it’s also a great way to get outside and make new friends at some beautiful riverside spots.

Help us revive our rivers!